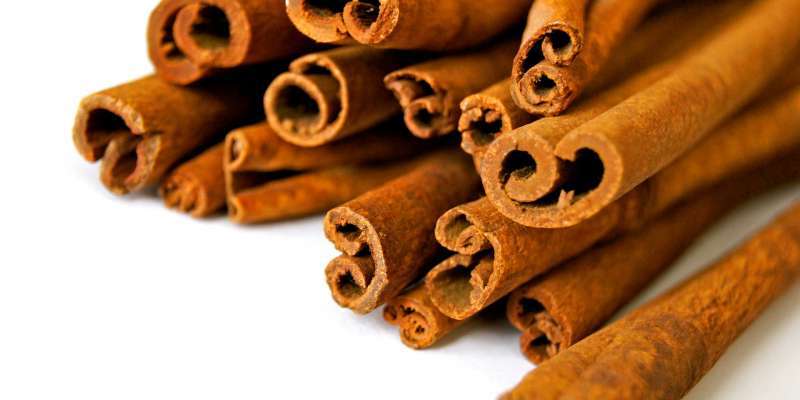 ﻿﻿﻿﻿﻿﻿﻿Cinnamon is a delicious aromatic spice used in kitchens. It is suggested in Ayurveda that cinnamon has been used to treat digestive problems, cold, and cough, weight loss, etc. It has been consumed as a spice that has amazing medicinal properties too.

The recommended dose is 2-4 grams of powder a day.

Here are the health benefits of Cinnamon:

It is noted that cinnamon has been effective for digestive problems. It contains dietary fiber which helps for an upset stomach and provides relief for cramps, flatulence, nausea, and heartburn. The fiber is known to increase the peristaltic movement and promote bulk which helps in preventing constipation and gastric issues.

Cinnamon has warming properties that help in combating cough and cold. It contains a chemical, cinnamaldehyde which also helps to fight various infections. Cinnamon oil used to treat respiratory infections. It also helps in reducing tooth decay, has anti-fungal and anti-bacterial properties.

Cinnamon is known to control diabetes as it helps in maintaining blood sugar levels. A chemical in cinnamon slows the stomach emptying process and breakdown of carbohydrates in the digestive tract. Also, a compound in the cinnamon acts on cells by mimicking insulin. Various studies have shown anti-diabetic effects of cinnamon.

It is also used as a preservative.

Cinnamon helps to fight infections and repair tissue damage. It is found that antioxidants present in cinnamon have anti-inflammatory properties which lower the risk of disease.

It helps in the proper functioning of brain cells. In a study, cinnamon helped to improve motor functions in Alzheimer’s and Parkinson's disease. It has shown to improve the neuron functions in individuals with cinnamon in their regular regime.

It is found in studies that cinnamon has been proven to fight against fungal, bacterial elements in food. Apart from giving flavor to foods, this spice added nutrition to food that helps the body to fight against infections.

There is no doubt that Cinnamon helps in managing metabolic issues. In a study, it is found it could be effective in reducing metabolic-related problems like obesity, blood pressure, and dyslipidemia. Cinnamon can be used as an appetite suppressant for sugar craving individuals.

CAUTION: Too much cinnamon can cause dangerous side effects. Coumarin, a flavoring substance present in cinnamon can be harmful to the liver and can cause severe complications.

Anything in access can be counter-productive and also have a severe effect on the body. Always observe for any side-effects or any allergic reasons for anything you consume. For severe side-effects contact your nearest doctor immediately.